HELLO EVERYONE! I’m Boonnian Na Thalang or ‘Mai’ for short. At present, I’m working as a volunteer at MAP Foundation in Chiang Mai. I’m very excited to work with my host organization. This is my first work experience. I am working as a youth ambassador and as a volunteer at the same time. I decided to work with MAP Foundation in weekdays, 3 days per week including Monday, Tuesday and Wednesday. I started working on March 31st 2014. MAP Foundation is located near Chiang Mai University although slightly far frommy home. The first time I arrived at the Foundation, I felt strange because the Foundation is located on the second floor of a house. In the office, there are many rooms, each concentrates on a different project. On the first day, I arrived at work on time but no one was there to greet me. I waited for a few minutes. Luckily I saw a member of staff and introduced myself.

Most of MAP’s workers are Shan, Thai and migrant workers. They have strange names that I’d never heard before and their names are hard to remember. Now, I can recognize their names accurately. I now think their names are beautiful. In addition, I have made a new friend. They are senior interns. We come from same university. I’m very glad to meet them. Now, we are close friends. MAP office is small and because of this we are a very close-nit and friendly community.

MAP Foundation consists of 4 projects that collaborate with one another and each project has other minor projects. The first project is CHE project; stands for COMMUNITY HEALTH & EMPOWERMENT (CHE). CHE program promotes health, physical, social, and emotional well-being of migrants by empowering them to make changes in their lives, working conditions in both personal behavior and societal attitudes on sex, relationships, and gender. The second project is RFA project which stands for RIGHTS FOR ALL (RFA) working with migrant children, young women and the Myanmar migrant population in Thailand who are particularly isolated and stigmatized. The third project is MMM which stands for MAP MULTIMEDIA (MMM). MAP Multimedia Program produces advocacy materials in migrant languages, such as Burmese, Shan and Karen in order to effectively reach and empower the migrant community. The media strives to respond to the requests of the community as well as provide support to the work of existing programs focusing on the themes of labor, women and health rights.

The last project is the LRA project which stands for LABOUR RIGHTS FOR ALL (LRA).I work with the LRA project. The Labor Rights for All supports migrant workers communities to organize workers rights and provides paralegal counseling, translation services, legal representation and security for migrants seeking justice for violation of their labor rights.

Since April I learned many new things.

I have a chance to experience different cases. One of the problems facing migrant workers that that they often have to confront the Thai police authority because they don’t have driver licenses. Often they are forced to pay unfair fees for the charges. However, some workers didn’t pay money to the police and decided to consult the Foundation. They trust us and believe that we can help them and give justice for them. As a result, MAP negotiates between its authorities and the Police. Although most migrant workers were discriminated by the police and others who still has a negative attitude towards them, they can rely on the Foundation that understands and listens to their problems. I am very concerned with this problem, and I hope this situation can be solved by proper legal system in the near future.

Prior to this, I was given the opportunity to translate Burmese language. Don’t be fooled: I actually I can’t read Burmese language but I work with P’Ying Horm. She is Shan who also works in LRA. She can speak Thai fluently. I helped her translate Burmese to Thai language. She would give me the translations and I write them down. This was my first work, and I was very excited. The translation often comes at the request of migrant workers who have been exploited by their employers. So, we translated their problems for the advocate’s office.

Working with MAP, I also make good friends! One of the people I met is Jolin. She comes from Sweden who is now studying in Rangsit University in the forth year. We met each other unexpectedly in the evening on the way back home. We introduced ourselves. Then we talked about our work at the Foundation. She works in the CHE project.They use social media to promote positive images of migrant workers and try to help them. She is very friendly.

Recently I have worked with on a big event called ‘Workers Get Together: Proper Social Welfare for Workers’. We also had a May Day migrant Labor conference. The conference took place on 29 April to 1 May 2014 at Holiday Garden Hotel in Chiang Mai. This is a mega project that the foundation was involved for the first time. I was excited to be part of this project. I got a new role. It’s a notetaker who noted everything in the conference and every activity. We had a conference for three days. In addition, my friend and I created games for migrant workers and staff to play in the conference.

I think a notetakers duty is very important to review our activity. We can check our feedback to resolve problems. On the first day, migrant workers came to the meeting room to register. They come from many parts of Thailand, some of who had to take their normal working day off to attend the conference. On the second day, we had a surprise for the migrant workers. The night party. Everyone especially migrant workers were very cheerful and they had fantastic shows which included dancing, singing and performing. In the morning of May Day (1 May), we were ready to march to Chiang Mai city hall. We gathered to hand in a proposal to the Chiang Mai Provincial Governor. Migrant workers were pleased and proud to be there.

During the threedays, we had a full program each day for them, including an expert from Faculty of Economics at Chiang Mai University. He shared and explained about proper social welfare for workers. It was very useful for the migrant workers. They are made aware of their rights and benefits they are entilted to from their employers. After the conference we arranged creative activities for them such as games that break everyone into groups and allowed them to discuss and solve common problems together. Every activity had allowed migrant workers to introduce themselves, share opinions and experiences. We measured our success by the happiness of the migrant workers. 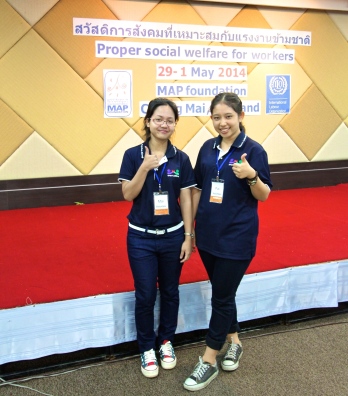 The May Day conference gave me the chance to make new Burmese friends. They are very friendly and ready to learn new things all the time. They were satisfied with this conference. I am confident that migrant workers can set up their own strong group. They can conquer their fear and get through calls for their rights. They will be able to stand up for themselves, and they will have more space in the society. After the May Day conference, I felt very surprised because I met three new foreign friends. They come from the United States of America. They will learn, observe our work and also teach English to everyone in the Foundation. I hope we will share experiences and work together from this stage. It’s a great opportunity to exchange culture and language with each other as well.

Lastly, after working with MAP Foundation for a month, I learned about Non-Governmental Organizations working systems. MAP is one of the NGOs that have been active with the United Nations, especially with the International Labour Organization (ILO). They carefully plan everything before in their workplan befire each implementation. I received work plans, working reviews, working feedback and the chance for workers to share opinions, discuss, ask questions. Everyone in the Foundation has equal rights at work, and I’m very happy to be here and working comfortably with them. Everyone in the Foundation is also friendly and willing to teach me a lot of things. Next month, I expect to work outside the office suchas surveying migrant workers’ living conditions at a construction site, and teach them about law and local language. Finally, I hope to make activities for migrant workers, for example, fun games to help them relax and allow them to share their opinions and update news to each other.

READ THIS IN ENGLISH

Read in English below! เนื่องจ […]